Luka Chuppi actor Kriti Sanon took to Instagram on Wednesday, October 21, 2020, to share glimpses of her quarantine workout. The actor shared five different workouts in one post along with an inspirational message. Along with the post, the actor also penned a note talking about the short video. Seeing the video, fans have gone all out to praise the actor for her dedication and also inspiring others.

Taking to her Instagram handle, the actor went on to share a sneak peek into her quarantine workout. In the video, one can see the actor performing five different workouts at home. The actor seems to be inspiring everyone with these workout videos. She can be seen sporting a grey sports bra, white tank top and blue shorts. She also opted for a high ponytail hairdo and no makeup.

Along with the video, the actor penned an inspirational message to all her fans. Kriti Sanon gushed out saying, “Don’t need Monday for Motivation ðð»ðªð»ðð» #QuarantineWorkout”. Take a look at the post below.

As soon as the post shared by Kriti Sanon surfaced online, fans of the actor couldn’t stop themselves but appreciate the video. While some of them called it “inspiring”, the others called it “lovely”. Kriti Sanon’s workout videos seem to be inspiring many of her followers. Some also went on to comment with working out, happy, red heart emojis. The post also received over 124, 028 likes. Check out a few comments from fans below. 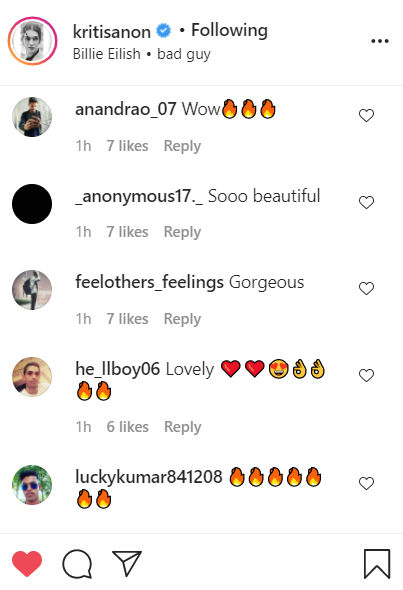 Apart from Kriti Sanon’s fitness video, off late, Kriti has been penning down a few short poems and sharing them with fans on her Instagram handle. The poems written by the actor reflect her mood and opinions. Apart from that, she has also made a special highlight column on Instagram where she posts all her poems. Take a look at her recent one.

On the work front

The actor is all set to be seen in the much-awaited film, Bachchan Pandey alongside Akshay Kumar, Dimple Kapadia, Rajkumar Rao, and Paresh Rawal in lead roles. Post that, Kriti Sanon will also be seen reprising her role in Heropanti 2 alongside Tiger Shroff. She will also be a part of the Hindi remake of the Marathi movie Mala Aai Vhhaychy!, which won the National Award in the year 2011. The film will be titled as Mimi and will be helmed by Laxman Utekar and will star Pankaj Tripathi and Sai Tamhankar in crucial roles.