A team of UC Berkeley and UCSF health experts warned prison medical officials nearly two weeks ago that they’d need to cut the population of San Quentin State Prison in half to avoid a potentially “catastrophic” outbreak there.

But prison officials didn’t heed the warning and, since then, confirmed coronavirus infections among prisoners have rocketed from 48 to 456, far outpacing any other facility in the state and overwhelming a system that waited too long to react.

The memo by a team of health experts warned that conditions were already “dangerous” and the only way to control the situation would be to reduce the prison’s population. The massive outbreak at San Quentin was sparked by California corrections officials’ mishandling of the transfer of infected prisoners from another prison.

The memo, submitted to the statewide correctional health care system on June 13, warned that San Quentin has “profoundly inadequate resources” to deal with the surge of cases, and failure to quickly address the crisis could have “dire implications” for the Bay Area, straining community hospitals and risking the health of incarcerated people and prison employees alike.

State prison officials declined to comment on the memo, and said they will have more information by the end of the week on overall movement and release efforts.

No prisoners at San Quentin tested positive for the coronavirus in March, April or May. It was only after state corrections officials transferred 121 incarcerated men to the prison from a virus-swamped facility in Southern California that the outbreak occurred. The transferred men were not tested for up to a month before they were placed on buses, The Chronicle reported, and after they arrived at San Quentin, the virus began to spread quickly.

At least 1 of every 8 residents at San Quentin are now infected, and more than 40 staff. None have died yet, but 20 incarcerated people and two employees at other state prisons have died after contracting COVID-19.

An initial version of the memo, submitted on June 13, was written by six physicians and infectious disease experts, some affiliated with the Berkeley School of Public Health and others with Amend at UCSF, a health-focused program aimed at “changing correctional culture.” On June 15, the group revised the memo to add more recommendations.

They sent the memo to California Correctional Health Care Services, the federally appointed provider of medical care in the state prison system. (The arrangement is the result of a long-running federal lawsuit over conditions in the state prison complex).

While the memo is a public document, it has not been previously released. The memo was provided to The Chronicle by the Prison Law Office, which is suing the state over the quality of prison medical care.

The memo argues that it’s difficult, if not impossible, to create “social distance” inside a prison, particularly one like San Quentin, an aging facility with “exceedingly poor ventilation, extraordinarily close quarters exacerbated by overcrowding, and inadequate sanitation,” the scientists wrote. “We therefore recommend that the prison population at San Quentin be reduced to 50% of current capacity (even further reduction would be more beneficial) via decarceration.”

“We spoke to a number of incarcerated people who were over the age of 60 and had a matter of weeks left on their sentences. It is inconceivable that they are still housed in this dangerous environment,” the experts, who toured the prison, said in the memo.

The experts also pointed to specific housing units as being especially dangerous.

For instance, two of the most highly populated areas of the prison are North Block and West Block, where more than half of all residents have at least one risk factor making them seriously ill from the virus, the experts wrote. 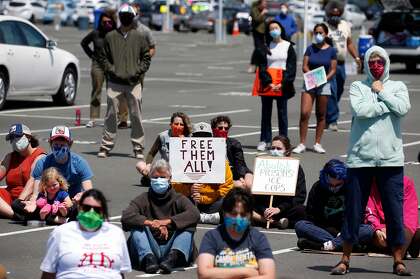 “An outbreak in North and West blocks could easily flood — and overwhelm — San Quentin as well as Bay Area hospitals,” they wrote in the memo, adding that they were concerned about older residents dying if they get infected.

Another area of San Quentin, the gymnasium, has been turned into an open dormitory, with prisoners bunked closely together. The health experts wrote that they found this appalling and said it could lead to “a catastrophic super spreader event.” Another dorm in San Quentin, known as H Unit, houses hundreds of men in bunks.

The Berkeley and UCSF scientists urged the state to develop an emergency response team to manage the growing outbreak, to speed up the testing process, and to assemble a field hospital for treating sick prisoners and separating them from the healthy. The experts raised an alarm about the lack of space inside the prison to isolate the infected from the uninfected.

“It is a frightening public health reality that in a matter of days there may be no cells to isolate a potentially infectious COVID-19 patient,” they wrote.

This warning proved prophetic: In the last few days, San Quentin has run low on cells with solid doors for isolating patients and is now trying to turn other housing units into COVID-19 wards.

The health experts also wrote that corrections officers and nurses at San Quentin are not always wearing masks, even though they are required to, and officers commonly move between housing units during the course of their shifts, potentially carrying the virus from place to place.

“This is an enormous risk for the spread of COVID-19 between units,” the memo concluded.

During a Wednesday news conference about COVID-19, a Chronicle reporter asked Gov. Gavin Newsom if the state planned to release large numbers of incarcerated people at San Quentin and other California prisons dealing with big outbreaks.

He said that a plan to release about 3,500 nonviolent offenders throughout the state system is already in the works, set to begin on July 1, and people who qualify under that program at San Quentin may be released sooner. But he did not commit to the sort of sweeping release that the UC experts say is necessary.

“We don’t want to just throw people out on the streets and sidewalks,” Newsom said. “That wouldn’t be humane, either.”