A couple is proudly showing off their weight loss transformations after shedding a combined total of 300 pounds by intermittent fasting and following low-carb keto diets.

Ethan Spiezer, 36, from Illinois, overhauled his lifestyle in 2017 and lost 200 pounds in less than two years after his weight soared to over 400 pounds. His success inspired his wife Rebecca, 41, to start her own weight loss journey a little over a year ago.

‘Lucky for me, once she started losing weight, she became interested in healthy cooking and makes delicious foods for our whole family,’ he told Bored Panda. ‘Having a supportive spouse makes anything from doing the dishes to losing 300 pounds better.’ 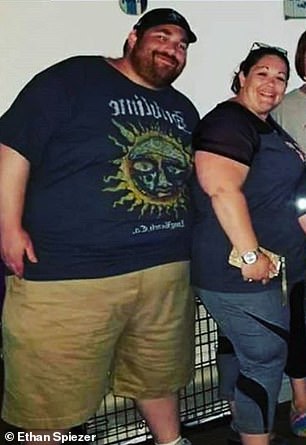 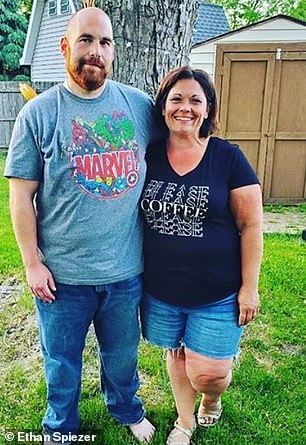 Before and after: Ethan Spiezer, 36, from Illinois, and his wife Rebecca, 41, have lost a combined total of 300 pounds over the past two years 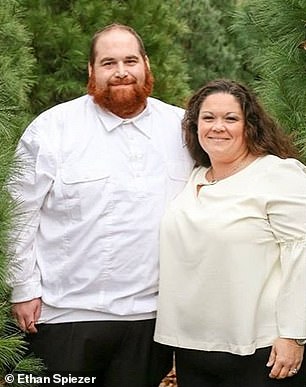 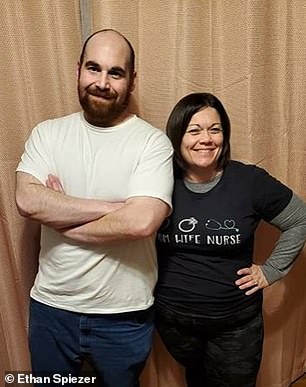 Looking back: At his heaviest, Ethan weighed over 400 pounds and needed a seat-belt extender to fit into an airplanes seat

Ethan said he realized he needed to lose weight while on vacation in San Diego in July 2017. Not only did he need a seat-belt extension on his flight, but he was too large to fit on the amusement park rides.

He recalled how he and his wife were both out of breath and tired during the whole trip. His mother had just died, and he realized he needed to get healthy for the sake of his children.

Ethan started his weight loss regimen three years ago by making changes to what he ate and when he ate it. At first, he reduced his carb intake, and then he later eliminated carb-laden foods from his diet.

He also incorporated intermittent fasting into his routine, meaning he only ate during an eight-hour window between 12 p.m. to 8 p.m. 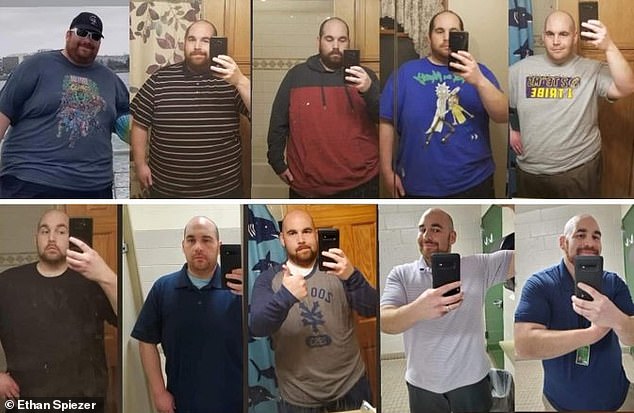 Then and now: Ethan started by incorporating intermittent fasting into his routine and reducing his carb intake. He later began following a low-carb, high-fat keto diet

‘I did one day at a time,’ he explained. ‘I knew I could do one day even though I couldn’t do a week. So I did one day, then I continued doing it over and over again.’

After losing 100 pounds by dieting alone, he began exercising regularly with resistance bands. His wife was so impressed that she put him in charge of her meals.

While he lost a total of 200 pounds, she has dropped 100 pounds, and they both plan on losing more.

‘I am no longer pre-diabetic, I no longer have fatty liver disease, I no longer require asthma maintenance or rescue inhalers, and my blood pressure is back to normal,’ he said. ‘Rebecca’s plantar fasciitis no longer bothers her in addition to overall body pain being down.’

While Ethan and Rebecca have the same goals overall, they are now on separate diets to address their separate needs. 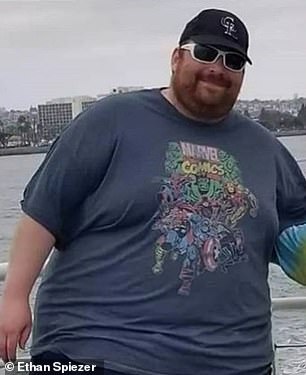 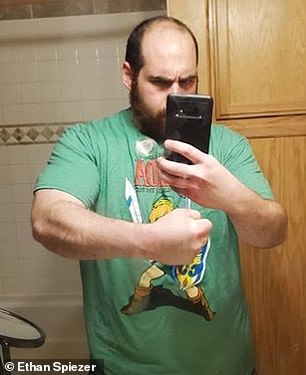 Getting fit: After losing 100 pounds by dieting alone, he began exercising regularly with resistance band 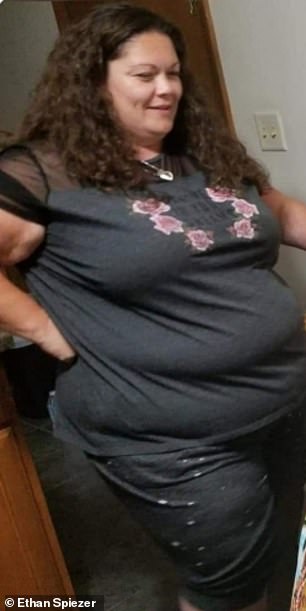 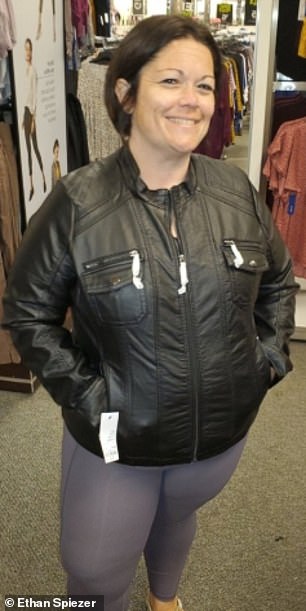 Inspired: Rebecca was so impressed that she put Ethan in charge of her meals. She has lost 100 pounds in 14 months while following a strict keto diet

He now eats some fruit and complex carbs whereas she avoids carbs in order to maintain ketosis, a metabolic state that starves the body of carbohydrates but not calories.

Carbs are shunned in the keto diet as they cause the body to produce glucose, which is used as energy over fat. Keto diets lead to weight loss because they make the body burn fat as its primary energy source.

Ethan admitted that he and his wife each gained 20 pounds while in quarantine amid the coronavirus pandemic, but they’re already back on track. While he’s lost 10 pounds, Rebecca has shed every pound she put on and then some.

To stay motivated, he took to Reddit on Monday to share incredible before-and-after photos documenting their weight loss.

‘We can finally go to Disney World and actually ride the rides,’ he wrote. ‘Except there’s a pandemic, so no vacation. Oh well, the last two years were still worth it.’ 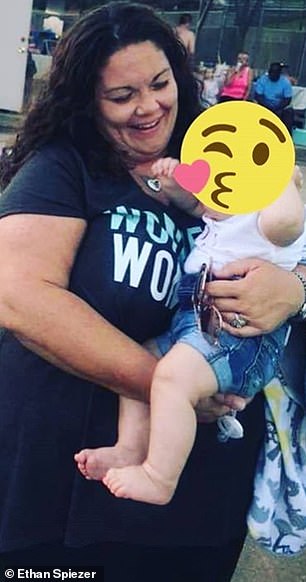 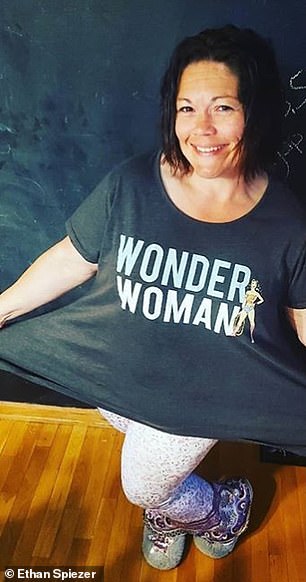 Changes: While Rebecca eats to stay in ketosis, Ethan has returned to eating healthy carbs such as oatmeal and sweat potatoes 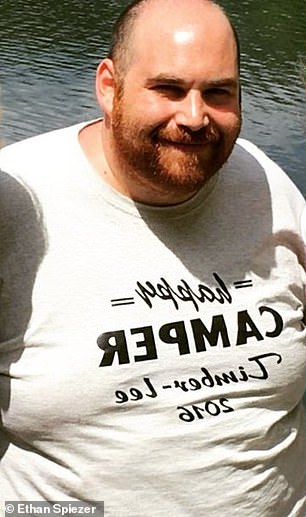 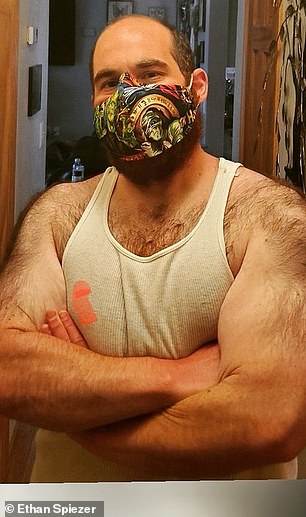 Focused: Although they both put on weight while in quarantine, they’re now back on track

The post has received more than 80,000 upvotes and hundreds of comments congratulating them on their success.

‘Wow! Congrats to you both! I’m sure you won’t see this comment but I wish you guys all the best and hope you get to go on vacation soon!’ one person wrote.

‘I’m sure you don’t need to hear it from me, but you two kick a** with some serious tenacity!’ someone else added.

Ethan told Bored Panda that he initially shared a weight-loss photo of himself on Reddit because he was looking for support, but he got so much helpful feedback that he has continued to post them.

‘I get messages from people telling me how much they’ve lost. I try to get my message out there so people know it’s doable without surgery, steroids, extreme eating, or hours of exercise daily,’ he said.

‘I give free advice to others and to date have helped friends and internet strangers lose over 1000 pounds.’

Packers players continue to workout and stick together during time off

How to get rid of visceral fat: Having a diet rich in pulses could help burn belly fat

How to lose weight without spending a fortune

Packers players continue to workout and stick together during time off