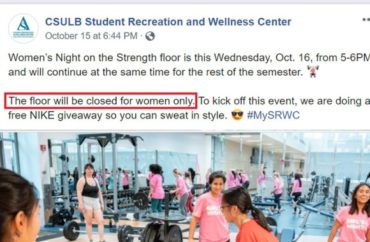 ‘After-the-fact, superficial adjustments pretending to suddenly be all inclusive’

Mark Perry’s side hustle of bugging universities that don’t employ him has borne fruit again.

The University of Michigan-Flint economist likes to send warning letters to Title IX and equity officials when he sees their schools offering events or programs that exclude participants based on gender. Sometimes he files federal complaints.

His most recent target, California State University-Long Beach, retroactively revised an ongoing event sponsored by its Student Recreation and Wellness Center that was advertised as “women only.”

Both Perry and The College Fix learned about the Oct. 16 “Women’s Night on the Strength Floor” from a self-identified student at CSULB last week. It was organized by the student government, the unnamed student wrote in an email:

I was unaware of this event and when I went to workout [sic] at the gym in the main area, I was denied access because I was a male. I was told that this is a time for only woman [sic] to work out and that it ends at 6PM.

He didn’t want to speak out publicly against the event, fearing “I will be targeted on campus.”

Perry took the ball from there. The same day he notified Larisa Hamada, assistant vice president of equity and diversity, that the center was advertising a women-only event. The original listing said “this program will continue at the same time for the rest of the semester. The floor will be closed for women only.”

In an email to Hamada copied to The Fix, Perry said the gender restriction in a university space was banned by Title IX:

I am aware of a specific male individual at your university, who wants to remain anonymous, who was preventing from using this public space during the most recent “Women’s Night on the Strength Floor,” which is a clear act of sex discrimination that violates Title IX.

He noted Stanford University offered “women-only” workout hours last year until Fix coverage prompted it to add men-only hours. That was the correct response to its “obvious and flagrant violation of Title IX’s prohibition of sex discrimination,” Perry told Hamada.

CSULB has only one option if it wants to legally continue offering a “Women’s Night,” and that is offering a “Men’s Night” for the same amount of time on the floor, he wrote. Perry warned that he would file a Title IX complaint with the Department of Education’s Office for Civil Rights if he did not hear back.

Perry told The Fix and the unidentified CSULB student Wednesday night that CSULB was playing the “Cover Your Ass” game, deleting an Oct. 15 tweet advertising the event. Unfortunately for the university, it was archived. Perry also took a screenshot of the original Facebook post (both below).

The Facebook post for the Oct. 16 event has been revised with no notice. It now advertises a “Womxn & Ally Night” that is “open to all genders” – but was not four weeks ago when it happened.

The banner on the rec center homepage for ongoing events also reflects the new purportedly inclusive wording (first image below).

A cached version of the page from early Wednesday morning (second image below) shows that this particular image from the slider did not exist, suggesting the university did not advertise the ongoing event for an indeterminate period following Perry’s complaint. Every other image in the current slider is available in the cached version.

But Perry said even these after-the-fact revisions still appear to violate Title IX:

Notice how the strength floor is NOT really open to all genders now, it’s only open to those who participate in the all-women (most likely) program. So it’s still not really open to men, because it will be unwelcoming and hostile to men, and I think CSULB knows this and they’ll be able to continue with “business as usual” (women only program) while pretending to comply with Title IX.

Regardless, CSULB’s quiet revisions show “how universities openly and brazenly engage in gender discrimination assuming nobody will call them on it,” he continued. “They just blatantly violate Title IX until they get caught and then make some after-the-fact, superficial adjustments pretending to suddenly be all inclusive of all genders so they don’t jeopardize their federal funding.”

The Fix has asked CSULB to explain what prompted it to change both ongoing and past promos for the event, and to respond to Perry’s criticism that the revised events still promote an “unwelcoming and hostile” environment for men.