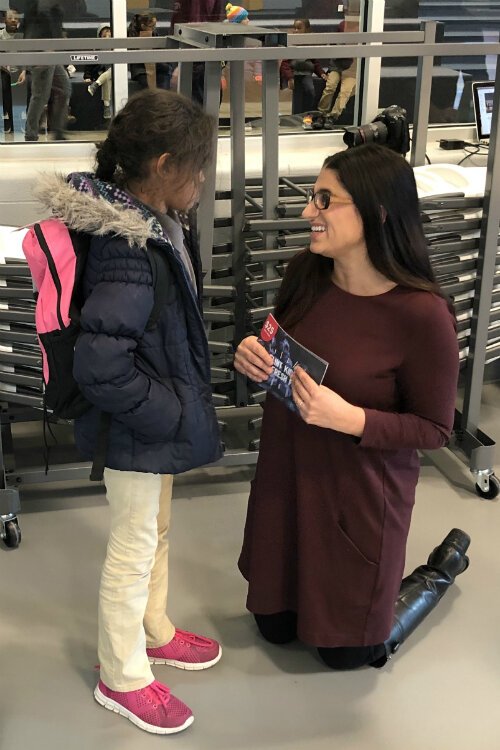 FLINT, Michigan—Dr. Mona Hanna-Attisha and representatives of the Detroit Pistons visited Flint Cultural Center Academy on November 8 to announce the kickoff of a healthy food initiative in Flint. And student Sonal Benitez-Gutierrez wasn’t going to miss this opportunity to learn from one of her heroes.

Benitez-Gutierrez approached Hanna-Attisha after the event to discuss Hanna-Attisha’s book, “What the Eyes Don’t See.” The book chronicles how Hanna-Attisha’s research helped uncover that Flint residents were being exposed to lead in their water supply. In particular, the third grader said she’d read and been inspired by the book, and asked Hanna-Attisha how she, “kept going even when people said you were wrong.”

Her impromptu question got her a hug and personal pep talk from Hanna-Attisha, and the candid moment fit in with the event’s larger mission: to educate children on the importance of healthy behaviors early in their lives.

Detroit Pistons owner Tom Gores and his FlintNOW initiative, along with the National Basketball Association Players Association (NBAPA), announced $325,000 worth of gift certificates for fresh fruits and vegetables at the Flint Farmers’ Market will be distributed to all school-going children in Flint. The program, called “Flint Kids Eat Fresh Food,” is in partnership with the Michigan State University-Hurley Children’s Hospital Pediatric Public Health Initiative (PPHI).

“A lot of behaviors, healthy or unhealthy, start in childhood,” said Hanna-Attisha, director of the PPHI and associate professor of pediatrics at Michigan State University College of Human Medicine. “That’s why it’s so critical to do these things early in a child’s development, so habits like the importance of healthy food stick with them, and they inevitably shape their parents. They say, ‘hey let’s go to the farmers’ market.’”

Each student — 13,000 total in the city —  is receiving a booklet with five $5 gift certificates. This is the third installment of the program since 2016, and, for the first time, it has been expanded to include high school students in Flint. So far, $865,000 has been distributed.

As a Flint native, Gores created FlintNOW to provide short- and long-term relief for the city during and after the water crisis. Kevin Grigg, vice president of public relations for the Pistons, attended the kickoff event at FCC Academy and spoke to the students on behalf of Gores.

“(Gores) was just like you, he grew up here, and now he’s the owner of the Pistons,” Grigg said. “We want you all to know that you all matter, and we want you to accomplish all of your dreams.”

The Pistons also sent another representative — team mascot Hooper — who played with students and helped pass out gift certificates. The relationship with the Pistons and the NBAPA fits perfectly with the healthy eating message Hanna-Attisha hopes students receive.

“You need to be a healthy eater if you want to be an athlete,” she said. “So it’s very consistent with the message of the Detroit Pistons. You can’t be an athlete if you don’t eat healthy and exercise. As a physician, I can tell kids these things, but they don’t always listen to a doctor. They listen to a basketball player, or to Hooper, reinforcing the message.”

Hanna-Attisha noted that significant scholarly research has been done linking the importance of instilling healthy behaviors at a young age, which is why the fresh produce initiative is just one component of larger efforts to address systemic public health issues.

“We have to tackle a lot of issues regarding access to healthy foods,” she said. “We need grocery stores, we need to address food security issues, and all of the issues of poverty. So this is just one of many things we’re doing — we have a nutrition prescription program in our clinic, we have cooking classes for children, we have dieticians, we have mobile grocery stores in Flint now. There are a lot of great things happening around nutrition.”

The partnership with the Flint Farmers’ Market also allows the opportunity to help boost local business.

“We also do this to support our local economy,” Hanna-Attisha said. “Part of our recovery in Flint, and part of being a place of prosperity, is having employment opportunities. Flint Farmers’ Market is a gem, it’s a national treasure, it’s one of the reasons my clinic is located there. We have so much to be proud of in Flint.”